Leonardo DiCaprio Casually Recalls Almost Being Eaten By A Shark 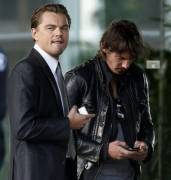 Leonardo DiCaprio may be helping save endangered species and their environments, including sharks, with his foundation but the actor almost became shark food while filming 'Blood Diamond'.

"I had a huge fear of sharks, and when I did Blood Diamond in 2006 I actually got stuck in a cage with a great white, which was... awesome," DiCaprio told Ellen DeGeneres.

"It was a gigantic great white … They actually said in 30 years this has never happened, but the tuna kind of got stuck on the top of the cage and the great white leapt out and tried to bite it and went into the cage with me."

"Half of its body was in and out, and I flattened down at the bottom, and it was this far away, and it chomped a few times, but I survived it."

DiCaprio's 'The Wolf of Wall Street', which has earned $64.5 million since its December release, recently set the record for the most times the F-word is used in a single movie with 506 times.