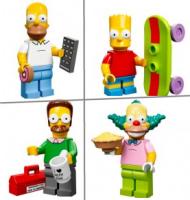 Lego has released the first look at its new Minifigures featuring sixteen characters from 'The Simpsons'.

The collectible figures will debut in May to ocincide with the airing of a special Lego-themed episode of the animated comedy on May 4.

They will also come with a small accessory to complete the character.

It's reported the minifigures will be sold for $3.99 each.