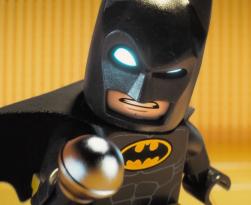 Because he's so special, Lego Batman has released a second teaser trailer for the upcoming film.

This one winks at the Batman's long history and the repetitive storyline at his trauma over the death of his parents.

Starring Will Arnett as the caped crusader, Ralph Fiennes as Alfred, Michael Cera as Robin, Zach Galifianakis as the Joker, Rosario Dawson (photos

) as Batgirl and Mariah Carey (photos

If you missed the first and longer teaser trailer: