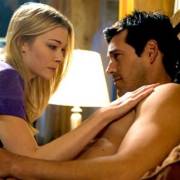 Even though LeAnn Rimes says she rarely fights with fiance Eddie Cibrian, she has a gameplan to resolve them quickly.

"A good friend just told me that the key to a successful marriage was to argue naked!" Rimes shared on Twitter this week. "I'm gonna do that from now on, when that rarely happens."

When a fan asked "what if you are arguing at a 7/11?", Rimes said the advice wouldn't change.

"Well, if I took my shirt off there it would make the news and we would both die laughing. I'm willing if it works!"

Rimes, who is now planning her spring nuptials, also took the chance to address women who were still taking shots at her for cheating on her husband and breaking up Cibrian's marriage.

"I must say, there is nothing more unattractive than a woman who puts another woman down," she said. "Us women already have enough problems in this crazy world, love each other. Speak kindly even to your 'enemies' if there are really such a thing."

"I believe enemies are in YOUR head, you create them. Love all... at least try."