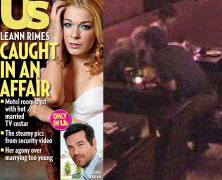 Writing on her official website, LeAnn says: "This is a difficult time for me and my loved ones, but I appreciate all your continued support."

"I would like to assure all of you that this is a place for you to hear things directly from me and as you all know, not everything in our lives is always black and white."

However, once again, LeAnn Rimes doesn't deny the affair -- just as her publicist refused to quash the claims a day earlier.

But that hasn't stopped Eddie Cibrian from issuing his own denial: "Other than being friends and two actors who were romantically intertwined in a movie-for-television we filmed last fall, there is no truth to the reporting. It is a fabricated story that is using random snapshots as connective tissue to create a scandalous relationship."

And although Cibrian has dismissed the claims as just 'friends' having dinner, an employee working that night in the Laguna Beach restaurant says the two were "quite clearly on a date."

Rimes wed former backup dancer Dean Sheremet in 2002, while Cibrian married model Brandi Glanville in 2001. They have two sons together, Mason, 5, and Jake, who is 23 months.