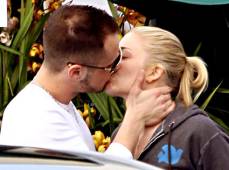 LeAnn Rimes is hoping a picture is really worth a thousand words, after ensuring she was photographed kissing her husband.

This less than a week after it surfaced that she was having an affair with her TV movie costar, Eddie Cibrian, and days after 'Us Weekly's release of a video that allegedly shows the two holding hands and kissing at a restaurant.

Rimes has acknowledged she and Dean Sheremet are going through "a difficult time," and has not publicly denied a relationship with Cibrian. In response to the reports, the singer has only said "not everything in our lives is always black and white."

Meanwhile, Cibrian, who is also married and a father of two, first claimed the story was false last week and called it a "fabricated story that is using random snapshots", but hasn't been heard from since the video was released.

And the affair definitely didn't hurt Lifetime, which aired the TV movie 'Northern Lights' starring the two this weekend. In fact, the flick scored big with an estimated 4.5 million viewers on Sunday night, the most for the network this year.