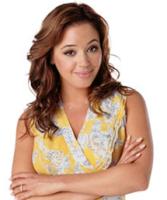 Leah Remini is finally ready to talk about Scientology with an upcoming book about her time in the Church called 'Troublemaker: Surviving Hollywood and Scientology'.

The actress famously left Scientology a couple of years ago.

Remini has said she did it for her daughter and "lost friends who can no longer talk to us who are still in the organization."

"She was getting to the age where the acclimation into the Church would have to start," Remini explained. "I started thinking of my own childhood and how I grew up resenting my mother because she was never home."

Publisher Ballantine says the book will see the 'King of Queens' star "detail for the first time her life growing up in the Church of Scientology and her rise to fame in Hollywood. Indoctrinated into the church as a child while living with her mother and sister in New York, Remini eventually moved to Los Angeles, where her dreams of becoming an actress and advancing Scientology's causes grew increasingly intertwined."

"But when she began to raise questions about some of the church's actions, she found herself a target, which led to her — and her family's — break from the church. Bold, brash, and bravely confessional, Troublemaker chronicles Leah Remini's remarkable journey toward emotional and spiritual freedom, both for herself and for her family."

Scientology has come under increasing fire in recent years because of Lawrence Wright's best-selling book 'Going Clear: Scientology' and the accompanying documentary for HBO.