Lea Michele: I Was Told 'Get A Nose Job, You're Not Pretty Enough' 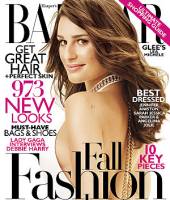 ) may now be a household name but the actress says she still remembers when she was rejected by talent agencies.

"You know how many managers told me, 'Get a nose job. You're not pretty enough?'," she tells 'Harper's Bazaar'. "But I proved them wrong."

"But people have to remember this is all new for us," she explains. "We're all reasonably young … I've learned some lessons. But people are going to say what they want to say. I know who I am, and I'm not perfect."

As for 'Glee' co-creator and executive producer Ryan Murphy's announcement that her character will be leaving the show next year, after graduating from McKinley High, Lea says she's trying to think positively.

"I don't stop," she says. "It's my nature. People have to tell me to slow down. I plan on playing every role on Broadway."

"I want to do movies, make music. Glee is only the beginning."