Lea Michele Opens Up About Cory Monteith's Death With Ellen 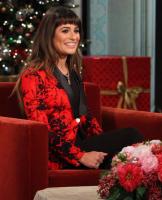 In an interview with Ellen DeGeneres, Lea Michele (photos

) opened up about the death of her boyfriend and 'Glee' co-star, Cory Monteith, and the criticism she faced for going back to work "too soon."

"It's certainly been a pretty rough year," Michele began. "But I've been surrounded by such great people, such great family."

Monteith died in July of an accidental drug and alcohol overdose.

Michele after receiving the shocking news, she had to immediately move out of her home to get away from the paparazzi.

"She was so wonderful to basically give me her home to myself and my family," Michele said of Kate Hudson (photos

), who has recurred on the Fox show. "It was so helpful to just, basically, have a safe place to process, and just have a minute to just breathe before getting back to my house with just has a lot of memories and stuff. So being some place else to just have a moment was really nice."

"It was just really hard," she explained. "There's so many different emotions and to kind of have people watching every step of the way. But to have that time at her home to just really be in private with this for a moment -- before getting back to work and before going home -- I'm just so thankful to her."

"What people also don't understand is that going to work is no harder than being at home and being in the house and opening up a closet and seeing a pair of shoes," Michele explained. "There's this grief that goes with you everyday whatever you're doing."

"When there's great moments, hard moments. So I'd rather, for me, be at work with the people who I love that are going through it. It obviously has it's own triggers, but at the end of the day I feel so safe there. And like I said, they're my family."

Michele also recalled when Monteith publicly admitting the two were dating in a past interview with DeGeneres.

"It's one of my favorite memories," Michele said. "I remember when he came home that night, he kind of puffed out his chest and he was like, 'I talked about you on 'Ellen' today.' I was so happy. He's such a private person, and I literally lived every day of my life feeling like the luckiest girl in the whole world. I just thought he was the greatest man and so at that moment, that memory, it means so much to me."