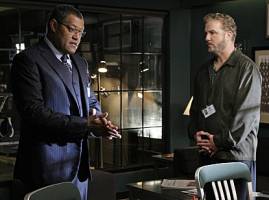 Laurence Fishburne is leaving 'CSI: Crime Scene Investigation' after two and a half seasons.

The Emmy-winning actor, who replaced fan favorite William Petersen as the series lead in 2008, opted not to renew his deal to continue on the crime drama.

Fishburne was considered a strong addition to the show when he joined but 'CSI' has never been able to recover from the ratings hit it took with Petersen's departure. The once-top-rated show posted its lowest-rated season finale ever last month with 11.4 million viewers.

So while both CBS and Fishburne may spin this a return to films for the actor, it may have been a mutual decision given the ratings. It remains unclear how the show will handle Fishburne's exit from the show.

CBS also announced that 'CSI' would move from its longtime Thursday 9 PM slot to Wednesday's this fall to make room for JJ Abrams' new drama 'Person of Interest'.