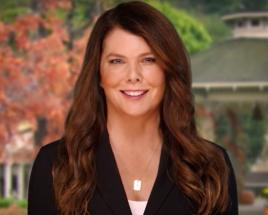 Lauren Graham responds after Stephen Colbert asks her about the earth-shattering accusations that she was acting with an empty coffee cup.

This after one person said it was "super annoying" and obvious that the stars were acting with empty cups due to the "physics" because of the way they were holding it.

An incredulous Graham says: "I'm going to tell you one thing. It's a true thing. There is always coffee in my cup!"