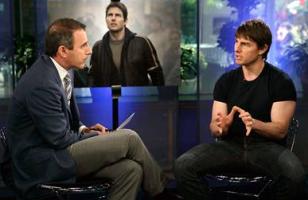 Holmes was there to discuss her new film 'Touched With Fire', which explores the use of drugs to treat mental illness.

"It also asks the question: Is it beneficial to treat these people with drugs?," Lauer began. "You and I both remember a heated discussion I got into on that subject here in this studio."

"How do you think the movie comes down on that? Where does it lead the viewer?"

The host was obviously referring to his discussion with Cruise during a June 2005 interview, in which the pair debated drugs and psychiatry.

There to talk about 'War of the Worlds', Cruise criticized people who take drugs, including Brooke Shields for taking antidepressants, and called Lauer 'glib'.

"It's very impressive to listen to you, because clearly you've done the homework," Lauer told Cruise at the time. "And you know the subject."

"And you should," replied Cruise. "You don't know the history of psychiatry. I do."

"You just communicate about it. If I want to know something, I go and find out. Because I don't talk about things that I don't understand."

For her part, Katie Holmes glossed over the Cruise association and simply said "Right."

"Well, what I think that our director did a wonderful job with is — this movie kind of just shows this is it. These two characters are in a love story, which he says is kind of its own mania. He puts the question out there for the audience to make the question."