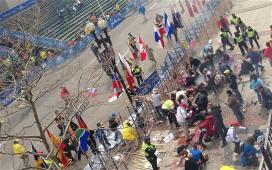 Jay Leno, David Letterman and Jimmy Fallon were not scheduled to air a new episode.

"Very bad things happened today for no good reason," said Kimmel. "And our thoughts are with the people of Boston and everyone who is suffering as a result of the bombings at the marathon. It's a disgusting thing."

"I don't understand it. But my job is to make you laugh, so I will try to do that -- and I will probably fail. I'm failing already."

While O'Brien, who grew up in Boston, called it an "upsetting and sad day."

"I wanted to take a moment to say that -- like everybody here -- my thoughts and prayers are with the people of Boston and everybody who has been affected by this absolutely senseless act," he said.

"That said -- it is our job to do a show. We're going to try and entertain you the very best we can -- which, given our track record, gives you people a 20 percent chance of having a good time tonight."

Craig Ferguson on the 'Late Late Show' didn't leave any doubt about how he felt either.

"Tonight's show is a little bit different," he said. "Obviously the news of today is so horrendous that it would seem insensitive at best to say, 'It's a great day for America,' so I won't be starting the show with that tonight. Is anyone else sick of this shit? I seem to have to say that too often."

"People say to me, 'Craig, your job is to make people laugh at the end of the day.' And I think, yes, that's true, but I've never professed to be any damn good at that."