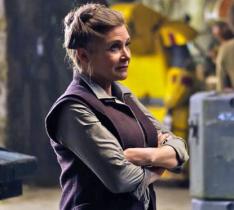 The late Carrie Fisher will appear in the final 'Star Wars' movie of the new trilogy, according to her brother, Todd Fisher.

Fisher tells the New York Daily news that Carrie's daughter, Billie Lourd, has granted the studio rights to bring her back in Episode IX by using already filmed footage.

"Both of us were like, 'Yes, how do you take her out of it?' And the answer is you don't," said Fisher at the TCM Film Festival in Los Angeles.

"She's as much a part of it as anything and I think her presence now is even more powerful than it was, like Obi Wan — when the saber cuts him down he becomes more powerful. I feel like that's what's happened with Carrie. I think the legacy should continue."

"I'm not the only part in that equation, but I think the people deserve to have her," he said. "She's owned by them."

Todd Fisher hinted that Disney would use old footage rather than attempt to use CGI to recreate the character.