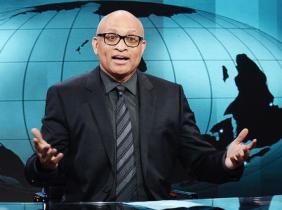 The late-night humor and talk show, which premiered in January 2015, will conclude its run Thursday.

The program, which filled the slot vacated by Stephen Colbert, was never able to amass the same following or viewers as its 'Daily Show' lead-in. The network decided to axe the show because it was losing nearly half of its lead-in every night.

"So, how was your day?," Wilmore began his show Monday night. "As many of you have probably heard, this is our final week of The Nightly Show."

"When we started the show, we wanted to have a conversation of some very tough subjects," he said.

"Our show was at its best when the news was at its worst. I'm just proud we were able to take on such issues and make people laugh during some very dark days."

"My only regret is we won't be around to cover this truly insane election season. Though, on the plus side, our show going off the air has to mean one thing: Racism is solved. We did it!"

As for what will permanently follow the Trevor Noah hosted 'The Daily Show', the network says it will "begin development" soon and it won't rush to find a replacement.