Larry King Does Stand-Up Comedy About His Age On 'Conan' 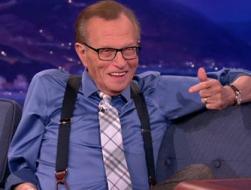 The 80-year-old Larry King delivers stand-up about his age after medical ethicist Dr. Ezekiel Emanuel published a write-up in which he thought it would be better if people died at age 75.

"Being older, you've seen a lot," says King. "For example, I watched the Big Bang before it was a television show."

"By the way Zeke I know the guy you were named after: the prophet Ezekiel. Now, he was an a--hole too."