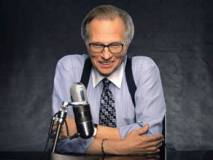 Larry King was diagnosed with and has recovered from lung cancer, the talk show host revealed.

In a statement to CNN on Thursday, King's rep said the legendary talk show host was "diagnosed with stage 1 Adenocarcinoma, the most common type of lung cancer, through a routine chest examination."

"He immediately underwent a successful surgery to remove the upper lobe and lymph node."

In an interview with Extra, King says: "Part of the checkup is a chest X-ray and that is the protocol. I do it every year, it's always normal. Then the doctor says, 'I see a little spot here. Let's do a CAT scan.'"

The CAT scan led to a PET scan and doctors found a spot they wanted to remove. He underwent surgery on July 17.

"If I had not had the chest X-ray, it would have progressed," he says. "Get a chest X-ray. It takes two seconds."

This year marks King's 60th year in broadcasting. He returned to work two weeks after the surgery.