Larry King Grills Piers Morgan On Why He 'Oversold' Himself 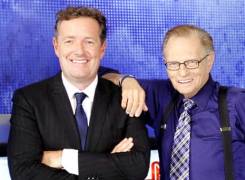 After telling the BBC what he thought of his replacement, Larry King appeared on CNN last night to tell Piers Morgan himself.

King said last week that he didn't think Morgan was 'dangerous,' as CNN had promised, and the network 'oversold' him to viewers.

"I spent the last few months saying that following you is like following Frank Sinatra," Morgan said. "I couldn't have paid you higher praise. You come in my backyard and say I'm oversold, dangerous."

But King wasn't backing down from his comments and instead began grilling Morgan on exactly what he had in mind when he used the word.

"Were you being facetious when you said you were dangerous?" King asked. "Was that an attempt at British humor?"

"Supposing I said, 'This first special will be the greatest special in the history of American television, the best -- and dangerous. It's gonna kill you, the special.' I can't live up to that," explained King.

"Well, we couldn't come in and undersell," replied Morgan. "I'm following a legend. You can't follow Sinatra in Vegas and say, 'By the way, I'm not very good, and this is going to be useless.'"

"I carry great responsibility to try and live up the legacy that you left for me," Morgan explained. "I want you to watch the show and to feel that it gets better and that you feel like I'm dangerous. I have to start hitting people or something."

"I was only kidding," Morgan conceded, as he chalked it up to "British humor."

"Aha, British humor. I didn't get it. I'm from Brooklyn," quipped King. "In Brooklyn, if you say you're dangerous, you better be dangerous."

King also asked Morgan about a recent appearance on the 'Late Show' with David Letterman, where the host said he could punch King.

"That's not strictly true," Morgan said. "Letterman said to me, 'I need you to punch somebody to get the ratings up. And I said, 'What if it was Larry?' And we decided punching you would not be a great move. But now you've challenged me to be dangerous," Morgan joked. "Maybe I should?"

Morgan also showed King that was wearing suspenders under his jacket in honor of him.