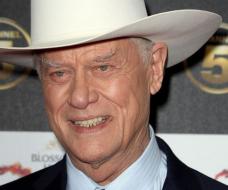 'Dallas' star Larry Hagman, who passed away at the end of November, will be honored with a funeral episode on the upcoming season of the show.

In the wake of the 81-year-old's death, producers had to scramble to make significant changes to the storyline around JR Ewing and how they would explain his absence to viewers.

With the 15-episode second season of the reboot set to begin on January 28, producers have announced that the March 11 episode will include a funeral for the show's patriarch oil baron.

The tribute will include many faces from the original 'Dallas' series, which premiered in 1978, that have not been seen in a long time.

"It will be funny and appropriate to J.R., but it will also be sad because his family loved him," says executive producer Cynthia Cidre. "As do the fans."

The late actor will also appear in an episode of CBS' 'I Get That a Lot' Wednesday night, which was filmed in September.