Larry David On Bringing Back 'Curb Your Enthusiasm' Now: 'Why Not?' 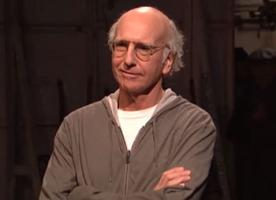 At the Television Critics Association summer press tour, 'Curb Your Enthusiasm' producer and star Larry David explained why he was bringing back the HBO comedy after the show's eight-year hiatus.

"Why not? I'm not a miss-er, so to speak," David said sitting alongside JB Smoove, Jeff Garlin and Susie Essman.

"I don't really miss things or people that much but I was missing these idiots. So I was thought 'What the hell?'"

"And I got tired of people asking me 'Is the show coming back?' I couldn't face that question anymore. I wasn't ready to say no, never, and I kept saying, oh you know, maybe, who knows, so I thought yeah, I wouldn't have to be asked that anymore."

Executive producer Jeff Schaffer said the viewers will quickly learn what Larry's been up to for the past few years.

"It'll be self-evident," Schaffer said. "Then we go to a very fun crazy strange place."

"The amount of uncomfortable situations he's been in since we last aired... it's like we're sitting in the Fort Knox of awkward," he laughed.