Lane Garrison Charged With Battery For Incident With Ex-Girlfriend 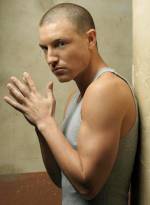 The charge came down after a witness came forward saying they witnessed the altercation between Garrison and Ashley Mattingly.

The 31-year-old has been held without bail since his arrest over the weekend because the incident could constitute a parole violation.

The actor, who spent 18 months in prison for DUI and vehicular manslaughter for a drunken driving crash that killed a teenager, had six days left before the end of his probation.

Garrison had maintained that video surveillance footage from the lobby of the building was "misleading" because he was simply trying to get his cell phone back, not trying to slap Mattingly.

However, if convicted, Garrison could face up to one year in jail.