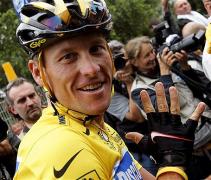 Cyclist Lance Armstrong twice offered a large "donation" to the same agency that recently concluded he and his team had used illegal substances, causing him to be stripped of his seven Tour de Frances medals.

The brazenly inappropriate gesture made to the U.S. Anti-Doping Agency is recounted by agency CEO Travis Tygart, who tells Scott Pelley the whole story of his agency's investigation of Armstrong in an interview that will air tonight on '60 Minutes Sports' on Showtime.

Tygart says Armstrong once gave the International Cycling Union, a regulatory body for his sport, a "totally inappropriate" gift of $100,000.

"I was stunned," he tells Pelley. "It was clear - it was a clear conflict of interest for USADA. We had no hesitation in rejecting that offer."

It had long been suspected that Armstrong and the U.S. Postal Cycling Team he led had been using substances and illegal treatments to enhance their amazing performances. The U.S. Justice Department investigated the team for two years but refused to charge him. Tygart says it was a decision that stunned him.

"I don't know why they failed to charge him. It's a good question and one that if you finally answer, let me know," says Tygart.

In addition to blindsiding him on its refusal to bring charges, the Justice Department also refused to share the results of its investigation with Tygart.

But the USADA didn't back down, says Tygart: "We have an obligation to clean athletes and the future of sport. This was a fight for the soul of sport."

In the interview, Tygart describes Armstrong and his team of doctors, coaches and riders as similar to a "mafia" that kept their secret for years and intimidated riders into silently following their methods.

Some of those riders are considered victims by Tygart, and he said they were forced to choose between following the doping program or being off the team, dashing the dream they had worked so hard to attain.

"It's our job to protect clean athletes," adds Tygart. "There were victims of doping."