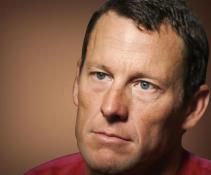 After denying allegations for over a decade, Lance Armstrong has finally admitted to using performance-enhancing drugs to win his seven Tour de France titles.

The cyclist made the admission in an interview taped with Oprah Winfrey yesterday, that will air on Thursday night.

Armstrong apologized to staff at the Livestrong charity he founded and has now been forced to surrender hours before he did the interview.

In an appearance on 'CBS This Morning', Winfrey said the world's most famous cyclist was "forthcoming" as she asked him in detail about doping on the tour.

"I would say he met the moment. I would say he did not come clean in the manner that I expected," said Winfrey. It was surprising to me. I would say that for myself, my team, all of us in the room, we were mesmerized and riveted by some of his answers. I had prepared, I'd read the recent decision."

"But I feel that he answered the questions in a way that he was ready. I didn't get all the questions asked, but I think the most important questions and the answers that people around the world have been waiting to hear were answered. And certainly answered – I can only say I was satisfied by the answers."

"I would rather people make their own decisions about whether he was contrite or not. I felt that he was thoughtful. I thought that he was serious. I thought that he certainly had prepared himself for this moment. I would say that he met the moment, and at the end of it, two and a half – literally two and a half hours – we both were pretty exhausted. And I would say I was satisfied."

He reportedly admitted he began doping in the mid-1990s, which would have been before he got cancer.

But that is no consolation for old friend of Lance Armstrong, who he had criticized and even sued for years for accusing him of doping.

"I never thought this day would come," says Betsy Andreu. "It's very hard, what he's done, but it's not enough. He was aided and abetted. He did not do this on his own."

The cyclist was stripped of his Tour titles and endorsements after the US Anti-Doping Agency issued a damning, 1,000-page report that accused him of masterminding a long-running doping scheme.

The interview will now run in two parts over two nights because Winfrey said there was so much material from the two and a half-hour meeting.

Watch a preview of the Lance Armstrong Oprah interview below: