Lamar Odom Checks Into Rehab One Year After Near-Fatal Overdose 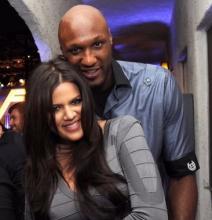 Lamar Odom has checked into rehab more than a year after the former NBA star's near-fatal overdose in a Las Vegas brothel.

"It was his own decision. He wanted to work on his mental and physical health for the next chapter of his life," a source tells E!. "He has not fallen off the wagon, but he understands the importance of maintaining his sobriety."

Odom was found unconscious at a brothel in Crystal, Nevada in October of last year with a cocktail of drugs in his system.

He was said to have suffered a "ischemic stroke," resulting from an overdose, after reportedly "doing crack cocaine all weekend" he was at the brothel.

It was thought brain damage was "likely", however, Odom, previously married to Khloe Kardashian (photos

), has been progressing slowly bus steadily.