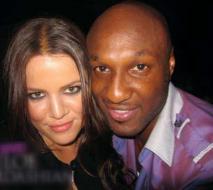 More than a year after being found unconscious in a Las Vegas brothel, Lamar Odom is talking about the serious incident.

The former basketball told 'The Doctors' on Friday that the last thing he remembered before waking up in the hospital was "thinking I was going to just rest a bit."

Odom had been using cocaine and a large amount of sexual enhancement drugs during his weekend at the brothel.

"I wasn't in a good place mentally before the incident happened," he said. "My wife at the time, we were going through some things," he said of Khloe Kardashian (photos

"I was in a dark place. I guess they say everything happens for a reason. So, I guess the reason is I'm here and I can tell the story."

"I couldn't even speak at the time, I couldn't talk," he explained of waking up after a coma. "I was scared."

Odom is now in rehab while Kardashian has made it no secret she's dating Cleveland Cavaliers player Tristan Thompson.