Lady Gaga On Miley Cyrus: 'Lighten Up and Leave Her Alone' 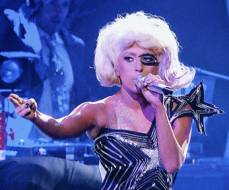 ) on Bravo's 'Watch What Happens Live'.

"I just think everyone has to lighten up and leave her alone," Gaga said when asked of Cyrus' raunchy performance with Robin Thicke at the MTV Video Music Awards.

"Because it's pop music, everybody is entitled to their own artistic expression. And if you have a problem with it, change the channel," she said.

The singer suggested Cyrus was trying to reclaim what she did during her Disney years.

"I don't understand the incessant need to constantly go on and on about hating things all the time because, what, she's 20 years old? And if anything, I give her props."

"She's growing up in front of the entire world, and maybe she's not so happy with the things that she did in her career when she was younger and she wants to be free," she posited.

"So let her do what she wants!"