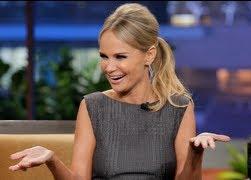 ) into trying a bite of sea urchin for her animal charity,

"It looks prickly. It looks like a porcupine, Jay! Oh my god, is this worth $500?," says the pint sized actress upon seeing the plate.

"Those kitties will die if you don't eat it," quips Leno.

"You hold the check, let me scoop out," offers the host.

"I mean... I mean." Chenoweth realizes After the crowd let out laughter, as she shakes her head.

She then musters up the courage the taken down a spoonful.