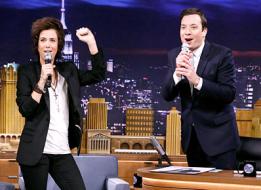 Kristen Wiig stopped by 'The Tonight Show' on Tuesday dressed up in character as One Direction heartthrob Harry Styles.

Wiig conducted the Jimmy Fallon interview as Styles, simultaneously learning and making up facts about the singer.

"Uh, we were at school," the 'Bridesmaids' star said of how the band got together. "And it was one of those, like, hey, I sing! And then everyone was like, let's go to Harry's house... and then we sent a tape to RCA."

As for how she styled the impressive hair, Wiig said: "I have to use two hairdryers."

The 'Saturday Night Live' alums couldn't help but laugh throughout the interview. They concluded by singing One Direction's hit single 'What Makes You Beautiful'