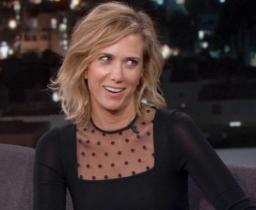 'Ghostbusters' star Kristen Wiig reveals the diabolical trick she used as a teen to stay out past her curfew without getting into trouble.

Kristen starts by talking about her prank calling.

"Wow, I didn't know you were such a bad girl. I had no idea," says Kimmel.

"I had a way of getting out of things," explains Wiig. "I did one thing that I'm almost afraid to say because if kids hear it they're going to do it and their parents will blame me."

"But I would go out with my friends and then I would stay out past curfew."

"And then I would call my house and my mom would answer. And I would say 'Oh thats okay mom, I got it' and 'She would say 'Oh, you're home?'"