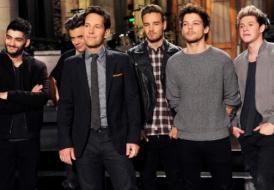 A host of guest stars joined host Paul Rudd and musical guest One Direction on 'Saturday Night Live' this weekend.

Rudd's 'Anchorman' friends Will Ferrell, Steve Carell and David Koechner made cameos while alums Kristen Wiig and Fred Armisen also stopped by for a couple of skits.

As you might expect, the show didn't miss the opportunity to skewer NBC's live Sound of Music musical with help from Wiig's Dooneese.

Update: One of the funnier sketches of the show with Rudd and Ferrell, Carell and Koechner in a rendition of 'Afternoon Delight' has been removed by NBC for whatever reason. We Will update if an alternate becomes available.