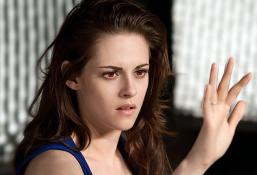 ) says the ending for 'Twilight's final chapter, 'Breaking Dawn: Part 2', will be different from the book.

But she tells fans of the Stephanie Myers' books that they don't stray too far from the original saga.

"It's easy to skim over, but you can find the root of our little twist in the book," she explained.

Stewart also gave a rather succinct summary of the plot for those who weren't caught up with the series.

"Popped one out," she recapped. "Pretty concerned with that. Me and Edward are doing quite well, people keep trying to kill my baby. But I'm now super spectacular so I can take care of that -- being a vampire."

"Director Bill Condon kept saying that he wanted to make this one feel like you're very much inside of the experience," Stewart explained.

"Like you're there, you're sort of a part of it, which is odd. But to do that we had to look directly into the camera instead of at each other."

"It was awful! I was like, 'Bill, you're depriving me of this experience. We've been waiting for vampire sex! What are you doing?!'"