Kristen Stewart: 'I'm Not Ashamed and I'm Not Confused' About My Love Life 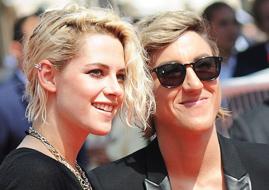 In an interview with Elle magazine, Kristen Stewart (photos

) says she's not confused about her love life because she's dating a woman.

"I'm not ashamed and I'm not confused," says Stewart. "Things have changed. And not just with me — we’re really allowed to encourage this new acceptance and be awesome."

"Right now I'm just really in love with my girlfriend. We've broken up a couple of times and gotten back together, and this time I was like, 'Finally, I can feel again.'"

It's quite a change for Stewart who in the past had refused to discuss her relationship with 'Twilight' co-star Robert Pattinson.

"It changed when I started dating a girl. I was like, 'Actually, to hide this provides the implication that I'm not down with it or I'm ashamed of it, so I had to alter how I approached being in public. It opened my life up and I'm so much happier."