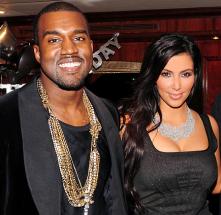 ) and their baby girl North on her new talk show 'Kris'.

Us Weekly reports West taped the interview with Jenner on Monday.

An insider tells the mag the rapper is "really bringing it" for the interview and talks about "the baby, living with Kris Jenner, his relationship with the press and love for Kardashian."

At one point the artist even jokes that he was "so in love" with Kim that, with her past two relationships being with NBA player Kris Humphries and NFL player Reggie Bush, he thought about playing sports to get her attention.

It's thought the interview will air on Friday, which is also the final episode of Jenner's six-week trial run.