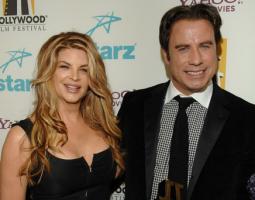 In an interview to air Friday on '20/20', Kirstie Alley defends her friend John Travolta and calls him the "greatest love" of her life.

"I know John. With all my heart and soul, he's not gay," says Alley, also a Scientologist.

"I think it's some weird way, in Hollywood, if someone gets big enough and famous enough, and they're not out doing drugs and they're not womanizing, what do you say about them?"

Alley says she had to fight her feelings for Travolta while filming 'Look Who's Talking', when she was still married to Parker Stevenson.

Calling Travolta the "greatest love of my life," Alley claims "it took everything I had inside, outside, whatever, to not run off and marry John and be with John for the rest of my life."

Travolta is the second co-star she's revealed a strong attraction to this week.

A few days ago, Alley said she had a "powerful attraction" to the Patrick Swayze. A revelation many considered distasteful given the late actor's wife would have to hear of it.