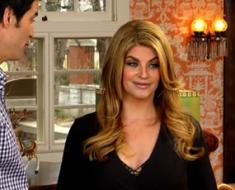 While taping an appearance for Friday's 'Rachael Ray Show', Kirstie Alley played a game of 'Marry, Make Out or Move On' with the host.

She was asked to pick between Justin Bieber, One Direction member Harry Styles and Nick Jonas.

"Let's go ‘make out' first because we've all seen Justin Bieber's Calvin Klein photos. He's so handsome," she said. "What a handsome man! I'm just all over Justin Bieber. I want to make out with him."

"I'm not so familiar with Mr. Jonas, but he's very cute. He's just not a booty call like Bieber."

Alley said she was still looking for a man after her 50-pound weight loss.

"They don't have to be funny, but they have to be witty and quick," she said. "I have to have someone who also loves to watch TV at night -- Forensic Files, for example, or Law & Order."