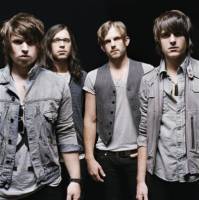 Kings of Leon has postpone several international tour dates due to an injury to their drummer.

The rock band says that Nathan Followill's surgery for a torn right bicep and labrum will force postponements of their tours in South Africa and Australia until at least October and November. They were originally scheduled to play in March.

Followill hurt himself while working out, according to the group's spokesman Ken Weinstein.

"Doctors have advised that Nathan will need at least three months to recover post surgery to ensure the injury doesn't recur," explains Weinstein.

"Sorry to all the fans in Australia and South Africa," Followill says. "My bum wing needs more time to heal but we'll be back later this year."

"I now have March off," jokes brother and bandmate, Jared. "Any ideas for fun? I could always fly down to Australia and party anyway. I need some sun."

The surgery will require several months of rehabilitation, but Followill is hoping to be back in time for the Coachella Valley Music and Arts Festival in April and European dates in May, June and July.