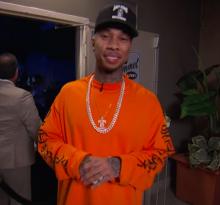 Jimmy Kimmel asks Tyga to explain why Sir Paul McCartney, Beck and Taylor Hawkins from the Foo Fighters were turned away at the door of his Grammys afterparty.

Tyga says he had no idea McCartney was outside.

"I had no knowledge. I was inside performing. I wish I would've knew he was outside. I would've went out there with a mic and brought him in," he says.

Asked if he's apologized to McCartney, he says: "Well, I mean I tweeted him. But I don't think he's seen my tweet."

He then invites the Beatles legend to attend his upcoming show.

"Oh, I don't think he's going to fall for that again," jokes Kimmel.