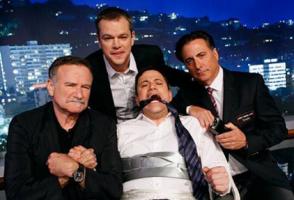 Watch as Guillermo tries to promote his own movies 'Ass Face' and 'Estupido' about "a stupid man... who is stupid" with an error pointing to Damon.

"He's from Boston. It's based on a true story... who has a friend named Ben," he says referring to Damon's friend Ben Affleck, of course.

Damon and Kimmel have had a mock rivalry dating back to the beginning of 'Live'. The actor was also at Kimmel's wedding a couple of weeks ago.