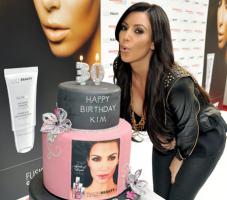 In an interview recalling the robbery, Kim Kardashian (photos

)'s concierge blames the Paris hotel's lack of security for the robbery.

"I went up to the apartment with the robbers. I was tied up in the first minutes, with handcuffs. I was in the room of Kim Kardashian. One was attacking her, the second one was with me," Abdulrahman tells the 'Daily Mail'.

"I saw Kim being pulled out of bed. We got to her bedroom and slid open the door. She was in her bed. Before we opened the door, she heard a noise and began to say, 'Hello? Hello?' I assume she thought it was her sister."

"The intonation of her voice changed when there was no answer. I felt she was worried. After that, one of them opened the door. The other one was fastened to me."

"She was crying 'Don’t kill me! I have babies, don't kill me, please, I have babies! I'm a mom. Take whatever you want."

"One of them kept telling her to shut up. I told her to be calm. I said, 'You have to be silent, you know.' She sat down on the bed. She asked me, 'Are we going to die?' I said, 'I don’t know, how can I know?' She began to scream again. That's why he put the tape on her mouth. A long piece of tape, all the way round her head."

He says the robbers left after they saw Kardashian's bodyguard calling her phone.

"I saw his name on the screen and I told them, 'You know who is ringing now? It is her bodyguard. If she doesn't answer, he will come here with the police.' They ran immediately."

"There was no real security at all," he says of the hotel. "It's a choice. The hotel doesn't care about security. We told them year and years before, you have to make a camera, you have to put a security process, about keys. Nothing was locked, there was no proper security there."

The group of five men, still at large, disguised as policemen reportedly stole more than $10 million worth of jewelry.