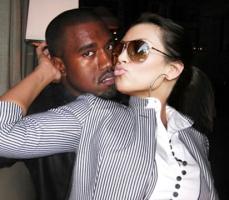 ) and Kanye West are expecting their first child.

The rapper made the surprising announcement at a concert on Sunday night in front of 5,000 fans at the Revel Resort's Ovation Hall in Atlantic City.

"Stop the music for a second, stop the music," West said in the middle of his track "Lost In the World. "Can you make some noise for my baby mama real quick?"

He also sang "now you having my baby" and called the pregnancy the "most amazing thing."

Family members quickly congratulated the couple on Twitter, admitting they had been keeping the announcement a secret. You know, just so no one missed the big news during the Christmas holidays.

"Been wanting to shout from the rooftops with joy and now I can! Another angel to welcome to our family," said sister Kourtney. Overwhelmed with excitement!"

"Keeping secrets is hard with so many family members!," added Khloe. "Especially when you are so freaking excited! Love is everything!"

The rapper and reality TV star went public in March.

Kim Kardashian filed for divorce from NBA star Kris Humphries in October 2011 after 72 days of marriage. Their divorce still has not been finalized.