Kim Kardashian Feared She Would Be Raped, Killed During Paris Robbery 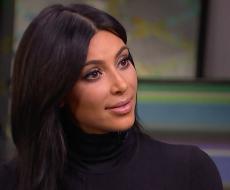 ) feared she would be raped and killed during the Paris robbery at gunpoint.

Five men dressed as police officers entered her luxurious Paris apartment and tied up the reality star in the bathroom.

Us Weekly reports Kardashian was in bed wearing only a bathrobe when she was awoken. She was then bound and carried to a bathroom.

"She thought there was going to be a sexual assault or that she was going to be killed in the bathroom," a source tells the magazine. "They did not speak English. Kim was hysterically crying, begging for her life, telling them about her babies."

"In her head, at that minute in the bathroom, she thought her life was over. There was a gun on her the whole time. She was begging them not to kill her."

"She definitely thought she was going to be raped and murdered. She feared rape — she was basically naked."