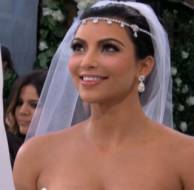 In her first interview since filing for divorce, Kim Kardashian (photos

) tried to appear grim as she said there was no "right or wrong" way to end her 72-day-old marriage.

"I mean, you know, in a tough situation. I think I'm trying to do the best I can, and it's actually a bit of an escape to come here," she said of being in Australia to promote her handbag collection.

After the host asked if she tried to go to marriage counseling to and tried to make the marriage work, the reality star replied: "I think when you know so deep in your heart, that you just have to listen to your intuition and follow your heart."

"There's no right or wrong thing to do. I don't think I'm ready to get into the details of it."

"Of course, I do want that time to be with myself and close friends and family. I don't think you ever prepare yourself for when the right time is, so I will get that time somewhere in the near future."

"But I do want to make clear that I would never marry for a TV show, for money, for anything like that. I think that's really ridiculous that I have to even defend that."

She called the public backlash a "double-edged sword."

"I think what really just, I think, upsets me most is that there has been from the start so many rumors of money and dollar signs and so much of it not being true."

"We wanna share these great times, but then when you want to have some time for yourself and have some private time, you're not really allowed to per say, like in the public."

"I guess, you know, that comes along with when you film your wedding for a reality show."

"I had this work commitment," she added, "so I really wanted to honor that commitment and to come out here and to get my mind off everything. You know, there's just no easy way to get through something like this."

Meanwhile, E! has said it will add a message to make mention of the divorce on its countless future repeats of 'Kim's Fairytale Wedding: A Kardashian Event.'