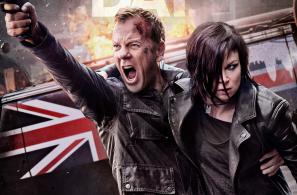 Producers say they debated killing off Jack Bauer in the '24: Live Another Day' finale.

Executive producer Howard Gordon tells Deadline Hollywood that they seriously thought about pulling down the curtain on the beloved Kiefer Sutherland character.

"We certainly tried out a lot of different endings and we rearranged the furniture every which way in the room," he says. "So we knew what it looked like for other characters to have met with different ends and we tried them all on, up to and including Jack himself."

"This has always been a show that is really about the days and the life of this man and no day is probably as intense as a person's last day."

"So killing Jack was something that was intriguing to us all but it had to be done just right. And that didn't present itself to us."

But, of course, the ending that producers went with saw the demise of longtime character Audrey Boudreau, played by Kim Raver.

“This was a really challenging decision to make and a difficult one to make because she was a such a strong character."

"In a way it is because of that that we all decided this was the way to go with Audrey's death. There was something about Audrey'' tragic life that it would have felt too saccharine not to go this way," he says.

"I will tell you, we even considered a happy ending. But 24 is ultimately a tragic story."

While they may have tried to set up another 12-episode installment with Jack Bauer being captured by the Russians, Gordon says he doesn't know if it will be back. It performed modestly but wasn't a gigantic hit for Fox.

"I would say ‘never say never' about anything," he says.