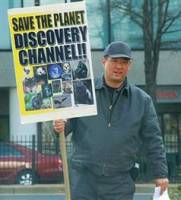 A gunman police shot to death after he took hostages at Discovery Channel's headquarters said he hated the company's shows because they promoted population growth and didn't do anything to help the planet.

Three hostages escaped unhurt after the four-hour standoff in Discovery's Washington office on Wednesday. After negotiating with the gunman for several hours, tactical officers ruled they had to move in when they saw James J. Lee pull out a handgun and point it at a hostage.

An NBC News producer who called the building to find out what was going on had a brief telephone conversation with the man when he came on the line unexpectedly.

According to police, at least one device on the man's body went off when he was shot. Although he apparently had four explosive devices strapped to him, including two pipe bombs.

This wasn't the 43-year-old's first encounter with the police. He was known as a longtime protester at the building and was even sentenced to six months of supervised probation for disorderly conduct in March 2008 for staging a 'Save the Planet' protest.

In fact, Lee had demanded Discovery end shows such as TLC's 'Kate Plus 8' and '19 Kids and Counting' because they were destructive to the planet. He said the network should be airing "programs encouraging human sterilization and infertility" instead.

"Humans are the most destructive, filthy, pollutive creatures around and are wrecking what's left of the planet with their false morals and breeding cultures," Lee wrote in a bitter manifesto.

"I want Discovery Communications to broadcast on their channels to the world their new program lineup and I want proof they are doing so. I want the new shows started by asking the public for inventive solution ideas to save the planet and the remaining wildlife on it."

"Nothing is more important than saving the Lions, Tigers, Giraffes, Elephants, Froggies, Turtles, Apes, Raccoons, Beetles, Ants, Sharks, Bears, and, of course, the Squirrels. The humans? The planet does not need humans."

"Discovery is hugely responsible for what is happening and their ineffective programming must be protested and dealt with. The time for pussy-footing around the subject is done. It's time to protest them until they start changing their stupid message. They are glorifying the damned fishermen who are overfishing the planet and I would think that you would see that for yourself instead of defending them."

"The Discovery Channel is actually not about saving the planet, they are just another 'green' corporation whose real interests lies in money! Products! Junk! Trash!"

At the time of his arrest in 2008, Lee said that he experienced an 'awakening' when he first watched Al Gore's environmental documentary 'An Inconvenient Truth'.