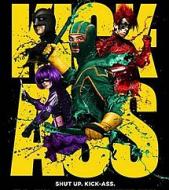 There has been speculation of a 'Kick-Ass' sequel ever since the film made a tidy profit in 2010.

"We shoot Kick-Ass 2 and American Jesus this summer," Millar says in an interview with Scotland's Daily Report. "Then Matthew and I have Secret Service, which is a neddy James Bond."

Millar doesn't expand on whether the key cast or director Matthew Vaughn will return for the sequel.

) and Nicolas Cage, earned $96 million worldwide on a budget of an estimated $30 million.

"My dad and I were living alone together after my mum died when I was 14 and that's reflected in Kick-Ass," Millar says. "I grew up wanting to be a superhero. You find a lot of these things turn out to be autobiographical."

"It's really odd. I watch the films and think, my God, that's what happened to me. It is done subconsciously."

"Even daft things, like at school there was somebody I fancied who really liked Dynasty. I started watching it so that I could chat to her about it. That is in Kick-Ass 2. I gave Kick-Ass' parents the same names as my parents."

The 42-year-old also speaks about his other new project, 'American Jesus'.

"I want it to be a beautiful film. A film about the returned Jesus Christ has amazing artistic potential. Jesus shows up in the middle of the financial crisis, America is in turmoil and the Eurozone is collapsing. They are quite apocalyptic times that we are living in with the gap between rich and poor."