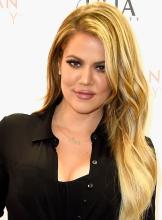 ) is responding to comments Donald Trump reportedly made about her behind the scenes of 'The Apprentice'.

This after several people involved with the show said Trump allegedly insulted Khloe during her stint on the show in 2009 and asked producers to find a way to get her off the show because of how she looked.

"What is this? We can't even get the hot one?," he reportedly said. "Why don't we fire Khloe? She is a fat piglet. Why did we get the ugly Kardashian?"

"He basically wanted to just get rid of her," said one editor. "When they fired her, it wasn't on merit. It was on him not liking her."

The 'Keeping up with the Kardashians' star tells the Los Angeles Times that she's not necessarily surprised by the revelation.

"I didn't think he was saying those things about me," the 32-year-old says. "But he says those comments about a lot of women—really derogatory things. Someone who is that simplistic to judge things off of surface is not someone I want running my country."

"It's not cool or appropriate for any person, male or female, to judge someone else by their looks. I find it really cruel. It's wild."

"I'm very good on energy, and I just never really vibed with him from the start."

"I'm a tough cookie, so something that he said — that's not gonna bother me. Ninety percent of the time, it doesn't bother me. I'm not sure why. I think I'm just in my own world."