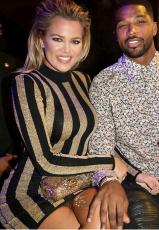 ) is pregnant and expecting a child with her NBA boyfriend Tristan Thompson.

On the last season finale of 'Keeping Up with the Kardashians' in June, she revealed she was longer on birth control and
joked that her boyfriend wanted enough children to start his own basketball team.

"He wants to have, like, five or six kids with me, and that's lovely," she said. "We could start at one and then grow from there. But now, knowing I'm not on birth control, it's really scary. It's like a really big step."

Khloe is said to be about four months along in her pregnancy.