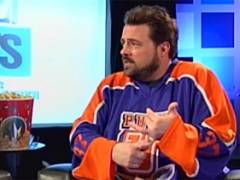 It's no secret that while 'Batman v Superman' has surpassed expectations at the box office, reactions among critics and viewers has been mixed.

Filmmaker and Superman fan Kevin Smith believes the film is a "fundamental misunderstanding" of both Batman and Superman.

"Remember before when we were talking about 'Flash', and that is has hear, humor, and spectacle? The movie, I felt like, didn’t really have a heart," Smith says in an interview. "It was certainly f--king humorless."

"There was nothing funny going on in that world whatsoever, but it had lots of spectacle."

"You can't take that away from Zack Snyder. Boy, he knows how to compose a frame and how to setup a shot. Beautiful visual stylist. But you need more than just pictures."

"You need the characterization and these characters seemed off character, particularly Superman. There seems to be a fundamental lack of understanding of what those characters are about."

"It's almost like Zack Snyder didn't read a bunch of comics, he read one comic once, and it was Dark Knight Returns, and his favorite part was the last part where Batman and Superman fight."

"But you get to do that in that book because you've got three books prior to that and 50 years at that point of comic-book history to build on."

Although Smith admits 'Batman v Superman' features "the best cinematic presentation of Batman fighting you've ever seen in a movie."