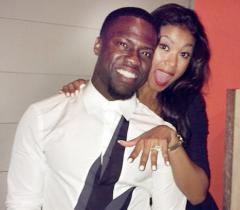 Kevin Hart is acknowledging having a difficult year after having to apologize to his pregnant wife in September for allegedly cheating on her.

"Have I been naughty or nice? That's definitely a tough question for Kevin Hart right now, it was a tough year for me," Hart told Extra on the red carpet for 'Jumanji: Welcome to the Jungle'.

"So now, I've recovered from some not nice times and now what I basically want is for Santa to know that I'm doing good and I'm doing better. Just to know I'm good guy."

Hart had to admit to infidelity after becoming the target of an alleged extortion attempt that included a "sexually provocative" video of the comedian with another woman.

Hart apologized to his then-8-months pregnant wife Eniko Parrish for a "bad error in judgment."

"You know, I'm not perfect. I'm not going to sit up here and say that I am or claim to be in any way shape or form. And I made a bad error in judgment and I put myself in an environment where only bad things can happen and they did," he said.

"And in doing that I know that I'm going to hurt the people closest to me, who I've talked to and apologized to … my wife and my kids."