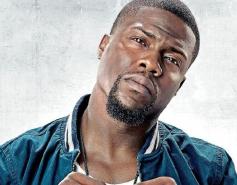 "It can be snatched from you. Look at how many stars they build up to beat down. Look at Britney Spears when she was the hottest thing ever."

"That's what the world is about. We want to build you up, but man, this s--t is going to be funny when you fall down," he said. "Britney shaved her head, goddamn! You can't allow yourself to be put in that position."

"You're not going to see me go crazy. I'll tell you that right now. Y'all can kiss my ass if you think I'm going to go crazy."

Hart said he tries to keep his career and family separate.

"If you come up to take a picture of me and I'm with my kids, I'm gonna politely tell you, 'Hey, man, I appreciate your support, but I'm on daddy time right now.' As a person, you should understand that."